New DHS Report: If You Love “Individual Liberty” Or If You “Believe In Conspiracy Theories” You Are A Potential Terrorist 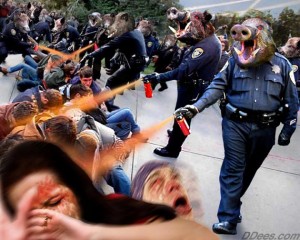 Well I must be on their list somewhere . . . EDITOR

Do you love America?  Are you against a one world economy and a one world government?  Do you deeply love individual liberty?  Do you believe in conspiracy theories?  If you answered any of those questions affirmatively, then you are a potential terrorist according to a brand new Department of Homeland Security report that was just released in January 2012. The report is entitled “Hot Spots of Terrorism and Other Crimes in the United States, 1970 to 2008“, and it was produced by the “National Consortium for the Study of Terrorism and Responses to Terrorism” for the Department of Homeland Security.  As you will see detailed later on in this article, the most shocking part of this report is when it discusses the “ideological motivations” of potential terrorists.  The report shamelessly attempts to portray red-blooded Americans that love liberty and that love their country as the enemy.  Once upon a time, deeply patriotic Americans were considered to be the backbone of America, but today they are considered to be potential terrorists. . . . Read complete report