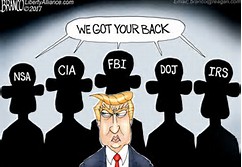 Robert David Steele is the Chief Enabling Officer (CeO) of Earth Intelligence Network and is devoted to teaching holistic analytics, and open source everything engineering. He is a former CIA clandestine services officer and was the second highest ranking civilian in US Marine Intelligence. He is nominated for the Nobel Peace Prize for the 2017 cycle for his work into open source intelligence.

In this interview we discuss in #Unrig campaign to push for electoral reform, how Donald Trump can work to defeat the Deep State, and the potential humanity could have once suppressed and hidden technologies are released.