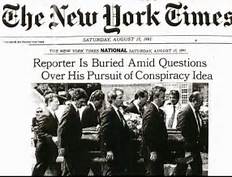 http://www.maebrussell.com/
http://www.pbs.org/
An investigation of the CIA and its role in international drug dealing.
The death of Joseph Daniel Casolaro (June 16, 1947 – August 10, 1991) became very controversial because his notes suggested he was in Martinsburg to meet a source about a story he called “the Octopus.” This centered on a sprawling collaboration involving an international cabal, and primarily featuring a number of stories familiar to journalists who worked in and near Washington, D.C. in the 1980s—the Inslaw case, about a software manufacturer whose owner accused the Justice Department of stealing its work product; the October Surprise theory that during the Iran hostage crisis, Iran deliberately held back American hostages to help Ronald Reagan win the 1980 presidential election, the collapse of the Bank of Credit and Commerce International, and Iran-Contra. Later developments of the Inslaw Case implied that derivative versions of Enhanced Promis sold on the black market may have become the high-tech tools of worldwide terrorists such as Osama Bin Laden and international money launderers and thieves.