The Real King of Rock and Roll today: Little Richard 2017 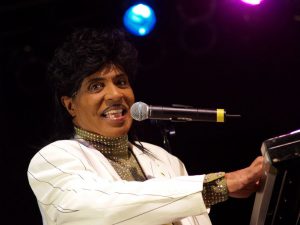 The REAL King of Rock and Roll today.

I am far from being a religious person, but join me as I  listen to what a great man who has seen it all has to say in the later years of his life. . . Your Editor Dennis Crenshaw

We include this song by the King for all of our service men and women and the families and friends who grieve for those who are dying on foreign soil to continue to fill the elitist controllers pocketbooks.

Not Just A Soldier

I created this video to not only support our men and women who protect and serve our country, but to also honor their families. The pictures are taken from the internet. The music is from Mylon Lefevre’s album “Over The Influence” from 1972, with guest singer Little Richard. Mylon’s album “Mylon, We Believe” from 1969 is considered by many to be the first “Jesus Rock” music recorded.

Little Richard and the other black musicians who joined the white boy Rock and Roll musicians of the 1950’s were changing America.  Had they been left alone they were, one by one, destroying the stupid racial division of America’s youth.

That couldn’t be.  The controllers needed the racial strife to further their plans of destroying our country.  Their first step was to change the direction of music.

The corporate world started recording, and playing on the controlled radio stations, only the “pure” white boys music and calling it Rock and sending all the black boys into performing something called soul music. Had the natural process of America’s music been left alone my generation would have become one America through our music.

The next step was to gain control of America’s “free education” by using the racial unrest in the South to take over the locally controlled schools, bringing their financing under the control of the Feds.  The rest is history. . . Your Editor Dennis Crenshaw