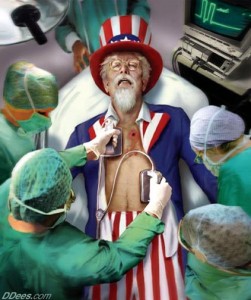 When will we as Americans wake up to the fact that our country’s government has been hijacked by the Controllers to a point where when something like this is put into place no one protests.

Oh, that’s right I almost forgot, that’s what this piece of trash legislation is all about … controlling  ALL protest . . . EDITOR

Last week, President Obama signed into law the Federal Restricted Buildings and Grounds Improvement Act of 2011 (HR 347). This law permits Secret Service agents to designate any place they wish as a place where free speech, association and petition of the government are prohibited. And it permits the Secret Service to make these determinations based on the content of speech. . . .read complete post

I realize, as do most patriots, that our last chance to return to the land of Liberty and Freedom would be to elect Ron Paul who’s ideas and convictions could help repair the damage done to the principals of of our Constitution and the Bill of Rights. Since the assignation of JFK, be it a Republican or Democrat administration, our country has been in the hands of the elitist Controllers who have now entered the fast track towards a totalitarianism government .  There is ample evidence to indicate that all of the national elections in the past 40 years have been fixed using rigged election machines and phoney reporting by the elitist controlled media.

With that in mind we know for a fact that Ron Paul has not, and will not, get a fair shake. But the movement is bigger than Ron Paul. So hold on to you hats!  I predict that the future of America will be in the hands of Patriots who will become stronger as the Controllers put into effect more, and more of the Orwellian laws and rules such as the one above.  That is if Americans wakes up to what is going on.  Or if they really care.  Folks, we are in one hell of a mess! . . . EDITOR

Brace yourself for The New Revolution – A Ron Paul 2012 Phenomenon