Mercury poles give up hints of water ice 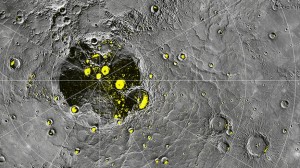 A Nasa spacecraft has found further tantalising evidence for the existence of water ice at Mercury’s poles.

Though surface temperatures can soar above 400C, some craters at Mercury’s poles are permanently in shadow, turning them into so-called cold traps.

Previous work has revealed patches near Mercury’s poles that strongly reflect radar – a characteristic of ice.

Now, the Messenger probe has shown that these “radar-bright” patches line up precisely with the shadowed craters.

Messenger is only the second spacecraft – after Mariner 10 in the 1970s – to have visited the innermost planet. Until Messenger arrived, large swathes of Mercury’s surface had never been mapped. . . . Read complete report