Editor’s NEW DVD Review: NAZIS at the Center of the Earth (w/video) 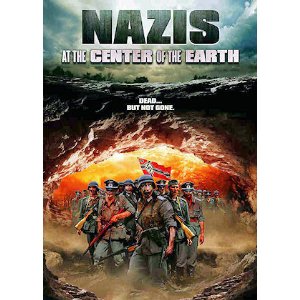 THEI DVD REVIEW – NAZIS at the Center of the Earth

Last Thursday I stopped by my local Red Box to check out the latest DVD’s they had in the machine.  I bet you can almost imagine the look  of astonishment on my face. “NAZIS at the Center of the Earth” was the new release glaring back at me.   . . My first thought was that I was being Punked! (My conspiratorial  brain at work). In fact, I almost looked over my shoulder to see if my partner Rick Osmon was hiding in the parking lot.

Instead I rented the movie and headed home to watch it. On the way I thought about the whole concept. I have been researching the “just-out-of-reach” story of the Hollow Earth including the Nazi/Antarctica connection for the past 40 years wondering when a movie would be made regarding the rumors. Now they had finally done it. I just hoped it wasn’t hokey.  There have been several attempts to cover the Subterranean Worlds that have all been, well, hokey. Funny, making-fun. that was fine. I mean it is a far out idea.  But still . . .

To my enjoyable surprise the movie is well made, using top talent, great makeup and special effects (the “Flying Saucer” deserves a mention)  and is a lot of fun to watch.

Although some of the known history was stomped all over, i.e. In the movie Dr.Josef Mengele AKA the “Angel of Death” is the architect of the plan for a 4th Reich rising from the NAZIS who escaped to an underground base under the ice in Antarctica (Mengele died in 1978.)  Of course he has Hitler’s head in a portable contraption to appear to “head” the bunch of NAZIS he has with him to actually carry out the evil deeds.

When It came to the Hollow Earth information they presented it straight forward and factually in the form of Jake Busey filling in his companions as they traveled into the earth. Fair shake.

I was also delighted when they mounted Hitler’s head on a very muscular and large robot body and then turned piloting the ‘flying saucer’ over to the nut.  Superb.   After all,  I believe robotics figures into the plans of the Controllers in a big way. That’s why I just added a Department, Robotics to THEI. (Check it out). The NAZI solders stomping around appear to be robots also.

But even if I had known nothing of the subjects used in this top-of-the-line adventure story, I would still have enjoyed it immensely .  Reminds me of the great movies by Roger Corman.

I give it 4 stars. A must see. I predict this movie will become a big cult classic.  And if you are a Hollowearther and don’t run out right now and get your hands on a copy I’m ashamed of you . . . EDITOR

BONUS. Here is a posting of part of an interview I gave for a Science Channel program several years ago. They kind of edited the interview that changed what I said, but at least I was able to get the information to a wider audience. What more can a researcher of unpopular ideas expect. Not much. . . .EDITOR