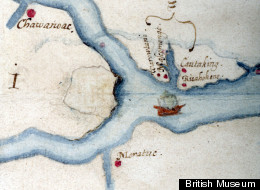 CHAPEL HILL, N.C. — A new look at a 425-year-old map has yielded a tantalizing clue about the fate of the Lost Colony, the settlers who disappeared from North Carolina’s Roanoke Island in the late 16th century.

“We believe that this evidence provides conclusive proof that they moved westward up the Albemarle Sound to the confluence of the Chowan and Roanoke rivers,” said James Horn, vice president of research and historical interpretation at the Colonial Williamsburg Foundation and author of a 2010 book about the Lost Colony. . . . Read Complete Article