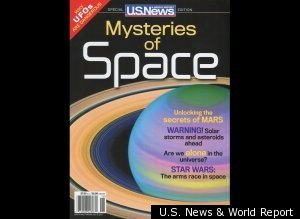 Why are UFOs dangerous? U.S. News & World Report is tackling that question in a special Mysteries of Space magazine that recently hit newsstands.

Every year, thousands of UFO sightings from around the world are reported. And, as the magazine points out, about 95 percent of those reports are explained as ordinary things like military aircraft, balloons, misidentified astronomical objects — such as planets or meteors — and meteorological phenomena.

That leaves 5 percent of unexplained UFOs — but with so many reported, even 5 percent is pretty large.

While the debate rages over whether some of the residual UFOs are interplanetary or interdimensional spacecraft, the magazine is exploring the potential danger of UFO encounters with commercial airline pilots.