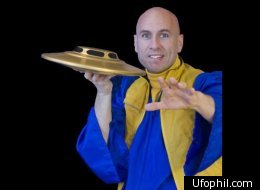 Photo Caption: UFO Phil said he is working on a new TV show that is sure to be a hit with out-of-this-world viewers. SOURCE Huffington Post

A California man who contributes to the popular paranormal show “Coast to Coast AM” with George Noory has plans for television that may seem out-of-this-world.

Phil Hill, better known as “UFO Phil,” told The Huffington Post that he is in negotiations with “a major network” to bring his alien musings to primetime. Hill would not reveal which network he is supposedly working with and would say only, “I had to choose a media partner with universal appeal, one that really gets the whole E.T. experience.” . . . Read Complete Report

Get the lowdown on UFO Phil, the President of Earth and Ambassador to the Aliens.

Who is UFO Phil?