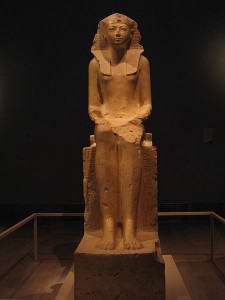 Photo: Detail of Hatshepsut, Eighteenth dynasty of Egypt, c. 1473-1458 B.C. Indurated limestone sculpture at the Metropolitan Museum of Art, New York City. Hatshepsut is depicted in the clothing of a male king though with a feminine form. Inscriptions on the statue call her “Daughter of en:Re” and “Lady of the Two Lands.” Most of the statue’s fragments were excavated in 1929, by the Museum’s Egyptian Expedition, near Hatshepsut’s funerary temple at Deir el-Bahri in Thebes. The lower part of the statue was acquired by Karl Richard Lepsius and taken to Berlin in 1845. The head, left forearm, and parts of the throne were excavated by the Museum, 1926-27 season and acquired in the division of finds. The Berlin fragment was acquired by the Museum in an exchange in 1929. SOURCE Wikipedia Public Domain

The scenes carved into a wall of the ancient Egyptian temple at Deir el-Bahri tell of a remarkable sea voyage. A fleet of cargo ships bearing exotic plants, animals, and precious incense navigates through high-crested waves on a journey from a mysterious land known as Punt or “the Land of God.” The carvings were commissioned by Hatshepsut, ancient Egypt’s greatest female pharaoh, who controlled Egypt for more than two decades in the 15th century B.C. She ruled some 2 million people and oversaw one of most powerful empires of the ancient world. . . . Read Complete Report