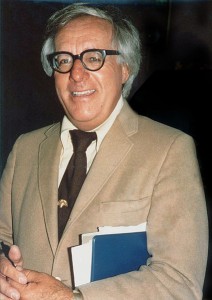 Ray Bradbury was a master of science fiction whose lyrical evocations of the future reflected both the optimism and the anxieties of his own postwar America.

His most famous novel is “Fahrenheit 451,” published in 1953. Named for the temperature at which paper ignites, the novel depicts a near-future society in which firemen don’t extinguish fires but instead burn books, and where the complacent populace, numbed by nonstop television and advertising, seems all too eager to embrace enforced ignorance.

By many estimations Mr. Bradbury was the writer most responsible for bringing modern science fiction into the literary mainstream. . . . Read Complete Report

Published on Jun 6, 2012 by AssociatedPress

An Evening with Ray Bradbury 2001

Science fiction author Ray Bradbury regales his audience with stories about his life and love of writing in “Telling the Truth,” the keynote address of The Sixth Annual Writer’s Symposium by the Sea, sponsored by Point Loma Nazarene University. Series: Writer’s Symposium By The Sea [4/2001] [Public Affairs] [Humanities] [Show ID: 5533]

Ray Douglas Bradbury, the author of more than 500 published literary works, was born in Waukegan, Illinois, on August 22, 1920. Bradbury moved with his family to Tucson, Arizona, when he was 6, but returned to Waukegan the following year. In 1932, Bradbury’s father lost his job and the family again moved to Tucson, only to return to Waukegan the next year. In 1934, when Bradbury was 14, the family moved permanently to Los Angeles, California. Mr. Bradbury still resides in Los Angeles, but regards Waukegan as his hometown and has used it as the setting of two of his novels, under the pseudonym of Green Town.. . . Read Complete Report