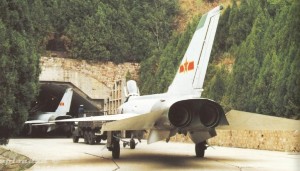 No# 1 photo presented in  in this study. PLA-AF Shenyang J-8 Finback fighters being towed into one of the PLA’s many “super-hardened” underground air bases. Tunneled horizontally into the sides of hills, these bases are unusually difficult to destroy and permit concealed preparations for operation, as fueling, weapons loading and runup activity is invisible to orbital and airborne ISR assets. Note the open exterior blast door (Chinese Internet). SOURCE: http://www.ausairpower.net

Notice how much China has been in the news lately… buying up your local movie theater chain (AMC), hotels, closed bases…building towns to move their people over.  You catch my drift.  They’re just spending all that money that they make selling us disposable  junk we all buy at the local big box store. Of course we can’t really say anything. That’s the American way – Invest. Make money.

But, The thing that REALLY bothers me is that they are spending a lot of that money on war preparation also.

The PLA’s network of around forty underground airbases provides a unique and indeed superlative capability to withstand a large scale counter-air campaign, as significant effort with penetrating munitions of large mass would be required to close such bases down for the duration of the campaign, or permanently render them unusable.As these bases deny surveillance by orbital, airborne or ground based ISR assets, they provide an inherent capability to perform covert preparations for combat operations, be it in times of conflict, or in the period immediately preceding a conflict. . . . Read Extensive report, w/photos, charts etc.
Category: Eyeballin' the One World Order, Hollow Earth/ Subterranean Worlds / Tags: air power australia, China, PLA Underground airforce bases