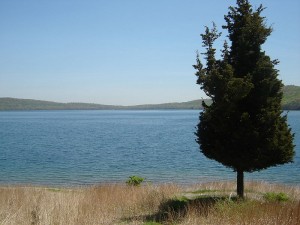 Photo; Is there a “triangle’ out there? Many say yes. Picture of Round Valley. Lebanon, NJ. Taken by Deathworm 18:58, 7 May 2007 (UTC) SOURCE Wikipedia (Public Domain)

A fisherman’s paradise, Round Valley Reservoir in Hunterdon County stretches across 2,000 noise-free acres and is stocked with plenty of trout. On a good day, you can gaze down about 20 feet into its blue waters.

But there’s also a dark side to the popular . . . Township fishing hole, one of New Jersey’s deepest man-made lakes. Somewhere in its depths lie six presumably drowned men who’ve been missing for years, and surrounding it are tales about its death toll, which numbers roughly a couple dozen within the past 40 years.

Some locals call the reservoir “the Bermuda Triangle of New Jersey,” a nickname that’s being uttered once again after a fishing hook snared a skeletal human foot earlier this month. . . . Read Complete Article