Parting the Red Sea: Did Researchers Find Proof of the Exodus Story? 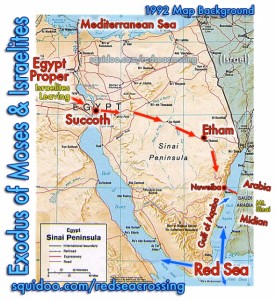 Photo: Exodus Route.  1992, Background Map Source. This map is in the public domain.
All other added words and lines added by ideadesigns 2011.

And Moses stretched out his hand over the sea; and the Lord caused the sea to go back by a strong east wind all that night, and made the sea dry land, and the waters were divided.  Exodus 14: 21

Whether or not you subscribe to the Judeo-Christian beliefs, you’ve likely heard the story of God parting the Red Sea and allowing the children of Israel to pass unharmed, delivering them from the Egyptian army who succumbed to the sea after Moses waved his hand and the water crashed down over them.

The epic tale was immortalized by Cecil B. DeMille in his famous The Ten Commandments of 1956 starring Charlton Heston as Moses.

To believers, this is a true story and is a historical example of God’s extraordinary supernatural might, as well as His mercy for His people.  To non-believers, it is a fairy tale.

But, what if it is all true?  What if evidence came to light that proved that the events as described in Exodus actually happened, exactly how the Bible/Torah said they did.  Would you believe? . . . Read Complete Article

The Crossing of the Red Sea – Documentary (Trailer)