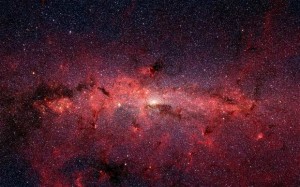 The planet lies in what they describe as a ‘habitable zone‘, neither too near its sun to dry out or too far away which freezes it.

And the discovery could help answer the question of whether we are alone in the universe, which has been plagued astronomers and alien fanatics for years.

Scientists found the planet, Gliese 667Cc, orbiting around a red dwarf star, 22 light years away from the earth.

Red dwarf stars are the most common stars in the neighbourhood of the sun, usually hosting planets called gas giants, which are not composed of rock matter.

Re-analysing data from the European Southern Observatory, the astronomers found Gliese 667Cc is a solid planet with roughly four and a half times the mass of Earth. . . . Read Complete Report

The definitive guide to the milky way galaxy

The secrets of our home galaxy revealed with all new state oif the art computer recreations from JPL and NASA.