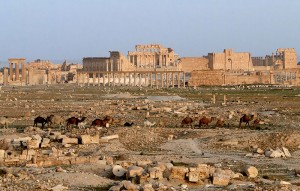 ScienceDaily (June 20, 2012) — Norwegian archaeologists have solved one of the great puzzles of the Roman Empire: Why was the vibrant city of Palmyra located in the middle of the Syrian Desert?

In ancient Roman times A.D., Palmyra was the most important point along the trade route linking the east and west, reaching a population of 100 000 inhabitants. But its history has always been shrouded in mystery: What was a city that size doing in the middle of the desert? How could so many people live in such an inhospitable place nearly 2 000 years ago? Where did their food come from? And why would such an important trade route pass directly through the desert?

Palmyra – City of a Thousand Pillars

Uploaded by TravelVideoStore on Jan 8, 2010