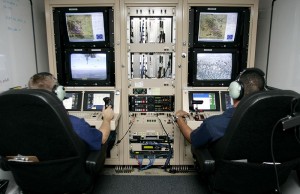 With a few arguably strange exceptions, nobody likes being spied on, and when you hear the phrase “domestic surveillance,” for better or worse being surveiled upon comes to mind. It’s unfortunate that the recent accessibility of unmanned aircraft has gotten drones wrapped up in all of this paranoia legitimate concern, and a new poll from Monmouth University shows that people are definitely worried about law enforcement using camera-equipped drones.

“The poll asked a national sample [approximately1.700 people] about four potential uses of unmanned drones by U.S. law enforcement. An overwhelming majority of Americans support the idea of using drones to help with search and rescue missions (80%). Two-thirds of the public also support using drones to track down runaway criminals (67%) and control illegal immigration on the nation’s border (64%). One area where Americans say that drones should not be used, though, is to issue speeding tickets. Only 23% support using drones for this routine police activity while a large majority of 67% oppose the idea.” . . . Read Complete Report

Published on May 17, 2012 by Johannes Fiftyeight