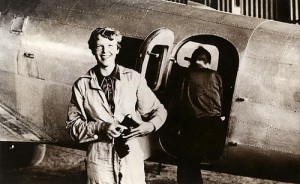 Seventy-five years after Amelia Earhart went missing over the Pacific Ocean while attempting to circumnavigate the globe, a new expedition will search the waters in hopes of resolving the longstanding mystery of what happened to the American aviation pioneer.

The Niku VII expedition will search the underwater reef slope off the west end of Nikumaroro, formerly Gardner Island, an uninhabited coral atoll in the Pacific, looking for signs of wreckage from Earhart’s Lockheed Electra. . . . Read Complete Report

“The first woman to fly solo across the Atlantic, Amelia Earhart was one of America’s first celebrities. After only a few years as a pilot she became the best-known female flier in America, not only for her daring and determination, but also for her striking looks and outspoken personality. Amelia even had an uncanny resemblance to Charles Lindbergh, the most famous man in America at the time, that publicists seized upon nicknaming her :Lady Lindy.” Three weeks short of her 40th birthday, Earhart disappeared over the Pacific Ocean, and her story became legend.” . . .HistoryFeed

Category: It's a Strange World After All / Tags: 75th anniversary, Amelia Airhart, expedition, her disasapperance, The Price of courage, unravel mysyery