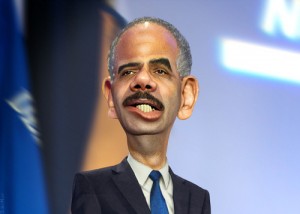 Boy… talk about talking out of both sides of you mouth at once!

But then again you cant blame the NAACP. After all Eric (With) Holder has been charged with Contempt of Congress.  The NAACP leadership might have felt that there might have been a process server in the crowd. Or better yet some law officer not in (With)Holder’s pocket might have been there to arrest Mr. (With) Holder. Checking ID’s might just weed the honest men out before they have a chance to serve or arrest  Mr. (With)Holder

But still there’s great humor in this.

You gotta have photo ID to watch Mr. (With)Holder give a speech explaining  why you don’t have to have a Photo ID to vote. . . . In other words the vanity of this present administration is such that you have to have ID to watch a liar talk but you don’t need one to vote them out.

In many states you need a photo ID to buy a pack of cigarettes, but you don’t need one to vote. Of course the cigarettes might harm your body so the government needs to “protect young bodies while letting undocumented voters vote will only harm our country. Really does make since doesn’t it?.

And just think,  unlike 3rd country voters – we don’t even get to dip our fingers in blue ink to prove we don’t vote more that once.  Go figure.

This whole deal sounds like something out of a B-grade NAZI movie. . . EDITOR

Earlier today, Attorney General Eric Holder addressed the NAACP Nation Convention at the George R. Brown Convention Center in Houston, Texas. What did media need in order to attend? That’s right, government issued photo identification (and a second form of identification too!), something both Holder and the NAACP stand firmly against when it comes to voting. Holder’s DOJ is currently suing Texas for “discriminatory” voter ID laws. From the press release:

All media must present government-issued photo I.D. (such as a driver’s license) as well as valid media credentials. Members of the media must RSVP to receive press credentials at http://action.naacp.org/page/s/registration. For security purposes, media check-in and equipment set up must be completed by 7:45 a.m. CDT for an 8:00 a.m. CDT security sweep. Once the security sweep is completed, additional media equipment will NOT be permitted to enter and swept equipment will NOT be permitted to exit. . . . Read Complete Report