The Rambo Rule, by Rick Osmon 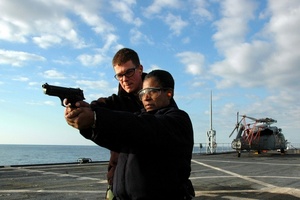 I ran across a headline in military.com that truly pissed me off.

Then it goes on to say that this “expert” is from a beltway bandit think tank, is a woman, and she wants SOCOM to shift away from what is called “direct action” operations. In other words, she wants the best fighters in the world to not have fighting on their mission list. That they should be teaching other, foreign forces, or building schools, or maybe dabbing the tears of the “victims'” families.

First, why would Congress or anybody else even accept testimony about Special Operations Command administration from somebody who has never administered a thing in their lives? Think tanks are fine for spending tons of money to try to find fault with government, since government can’t seem to do anything right anyway, but to try to reinvent an entire military command based on the say so of a beltway bandit is a major problem the US taxpayer can no longer afford. Let the soldiers and sailors and airmen do that particular re-inventing, since they are the ones who know where to cut out waste, know what works and what doesn’t, and, most importantly, they are the people who must live or die with the decisions. ” (A)s defense spending shrinks, SOCOM leaders are struggling to define the future role its elite units will play in the global military landscape.”

Having spent quite a lot of time with USSOCOM, from hanging and banging on the range with the grunt operator to attending formal functions with CENTCOM commander, to observing foreign equivalent commands, I can testify, to Congress or anyone who will listen, USSOCOM, as is, is the best money this country spends on defense.

” ‘What is clear to me is that SOCOM should do a much better job than it has been doing on the institutional side . . . that is where long-term strategic impact comes,’ Linda Robinson, an adjunct senior fellow at the Council on Foreign Relations, said at a July 11 hearing before the House Armed Services Committee’s Emerging Threats and Capabilities subcommittee.” (red flag emphasis by editor)

So what does all this mean to readers of The Hollow Earth Insider? Let me see if I can interpret a little.

The Council on Foreign Relations is a pet of internationalist, David Rockefeller. Rockefeller and the CFR want to eliminate nations altogether, beginning with the constitutional government of the United States. They want a One World Government. And Rockefeller has stated so very plainly. Therein lies a clue to why the CFR wants to reduce or eliminate the effectiveness of USSOCOM.

USSOCOM operators, the front line folks who swoop in on helicopters to capture the most elusive of enemies, do so without much regard for their own safety, do it at the drop of a hat, but, most importantly, are TOO effective for the goals and comfort of the CFR. In fact, if the CFR were ever declared a threat to the US, the SOCOM operators may be the only forces capable of rounding them all up, since the CFR employs their own elite guard force complete with heavy weapons. Oh, wait. Rockefeller already said that the CFR is designed to bring down the Constitutional government…

The “Muslim Threat” is not going away, it is moving in. The southern border is not getting better, it is dissolving at the insistance of the current administration and the CFR as well as NAFTA, NATU, OAS, and a horde of other scurrilous outfits and ill conceived laws and treaties, all of which were instituted, passed or ratified as a result of testimony by these same CFR “experts”. So, if the threat is still there and the only effective counter to the threat is the elite forces of USSOCOM, why try to eliminate the capability? Simple. The CFR is slowly but surely — and deliberately — coaching the country on how to fail completely.

The CFR needs to be re-defined as an international terrorist organization and eliminated with extreme prejudice. The hopeful look for a covey of black helicopters swooping on Arlington. And they will applaud when it happens.

So what exactly is the “Rambo Rule” in the title?

No, it has nothing whatsoever to do with Sylvester Stallone. Instead, it is named for an asskicker who served at Fort Bragg, at USASFCOM, where I had the pleasure and distinct privilege of meeting that particular Sergeant Major then serving at US Army Special Forces Command. He said his idea of the ideal SOF operator was a man who would never willingly go off orders, but if forced off grid was capable of fighting and maybe winning a war all alone. His nickname was Rambo, some will be able to guess his real name.

In that same decade I met several of these so called think tank “experts”. With only a couple exceptions, they couldn’t think their way around beltway traffic. They had fancy degrees (invariably in law or economics or political science) and they were trying to influence military doctrine and define military mission without ever having served or even observed.

CFR is trying to get the role of not just Army SOF, but all USSOCOM operators changed, leading to eliminating the command altogether. On the other hand, USSOCOM, through SEAL Team 6 (thank you Captain (select) Marcinko), took out the world leader of the most extensive “declared” terrorist organization on the planet. It’s what they do–and it scares hell out of CFR. If the American people, aka “the owners”, ever figure out what is really going on, the CFR will be the next transnational terrorist organization to fall.

I may consume many, many bags of popcorn watching this story play out.

Thank you, boys and girls of USSOCOM.