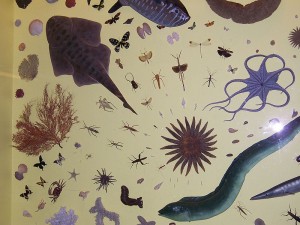 Photo: Illustation of the different types of symmetry of life forms On Earth. Display at the Field Museum, Chicago. The forms with bilateral symmetry can have heads. Life Forms with other types of symmetry have corresponding organs, if not a head. SOURCE Wikipedia (Public Domain}

Bilateral animals, or bilaterians — so called because unlike, say,jellyfish, they have left, right, back and front sides — are probably the first animals that could move on their own. Until now, the oldest fossil evidence for bilaterians dated back 555 million years.

However, scientists have found fossil burrows of a segmented slug that are about 30 million years older. . . . Read Complete Report