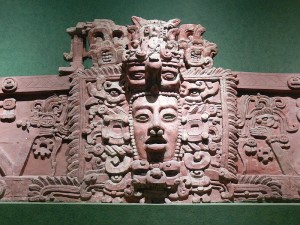 PROVIDENCE, R.I. [Brown University] — A team of archaeologists led by Brown University’s Stephen Houston has uncovered a pyramid, part of the Maya archaeological site at El Zotz, Guatemala. The ornately decorated structure is topped by a temple covered in a series of masks depicting different phases of the sun, as well as deeply modeled and vibrantly painted stucco throughout.

The team began uncovering the temple, called the Temple of the Night Sun, in 2009. Dating to about 350 to 400 A.D., the temple sits just behind the previously discovered royal tomb, atop the Diablo Pyramid. The structure was likely built after the tomb to venerate the leader buried there.

Houston says that through this find, much of it pristinely preserved, researchers are gaining a significant amount of new information about the Maya civilization. . . . Read Complete Report