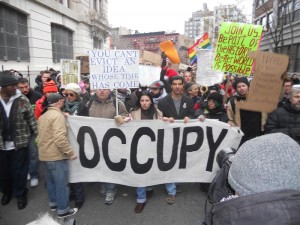 Despite many positives, the five-day gathering was rife with contention. Some Occupiers rejected the concept of NatGat outright, feeling that a movement geared towards autonomous action should not be centralizing around a national banner. In this vein, a group of Philadelphia anarchists organized a Radical Convergence the same weekend intended “for those who have felt Occupy in its current form demonizes and excludes radical dialogue, strategy, and action.” [Editor’s note: OccupyWallSt.org loves anarchists and condemns the scapegoating of anarchists from within and without the Occupy movement.] Over the five days, these theoretical divides became manifest around issues like “step up, step back,” the goals of the movement, and tactics of confrontation.

The heavy police presence, which included officers from the Philadelphia Police Department, the National Park Service, and the Department of Homeland Security, intensified the divisions around Occupy’s relationship with the police. . . . Read Complete Report

Submitted by Zachary Bell. For other perspectives, stories, and reportbacks from the National Gathering, check out the #NatGat section at Occupied Stories.