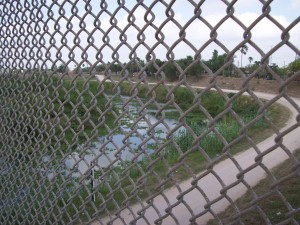 Every day, hundreds of people cross the border illegally into the Arizona desert. In Tucson, the Border Patrol uses a wide mesh of technology to try to stop them. CNET Road Trip checks it out.

TUCSON, Ariz.–It’s summer in the Southwest, and there may not be a hotter border anywhere in the United States. For one thing, the mercury is easily over a hundred every day. And then there’s the steady flow of organized smugglers trying to sneak themselves and their substantial cargo — of migrants and/or drugs — across Mexico’s long desert frontier with Arizona.

There are nine U.S. Border Patrol sectors stretching across America’s southwestern frontier. And back in 2000, the agency was snagging more than 2,000 people a day for crossing illegally into its Tucson sector — which is responsible for 262 linear miles of border and about 90,000 square miles of territory — making it one of the busiest.

But these days, that number has plummeted to between 300 and 350 a day, and the Border Patrol’s adoption of a broad set of new technology aimed at combating smugglers — a complex network of cameras and sensors in the ground, on towers, on the back of mobile trucks, or mobile agents, and airborne — has played a large part in the reduction. After all, if a smuggler knows that he and a group of migrants he’s shepherding are likely to be spotted thanks to the technology, he’s more likely to try another area. . . . Read Complete Story w/ photos