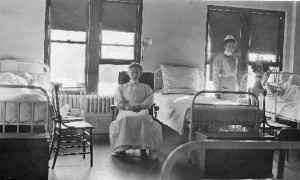 Photo: Real photo postcard (RPPC) of nurses on ward. The postcard was never mailed and was not dated. The stampbox indicates the card was printed between 1904 and 1918. Publisher: NA. POSTED BY; Chuck SOURCE nurse-entrepreneur-network.com (Public Domain)

(CBS News) The latest advancement in medical care might be wheeling its way to a hospital near you.

CBS station WBZ in Bostonreports that iRobot, based in Bedford, Mass., has created a new robot called RP-VITA that’s essentially a doctor on wheels.

“Getting the right specialist to see the patient in a very short amount of time can make the difference between life and death,” Glen Weinstein of iRobot told the station. Cue the robotic physician. . . . Read Complete Report