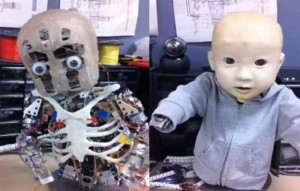 Here’s another robotics report that seems to take THEI’s ongoing observations  another giant leap as we chronicle  and archive Human-like Robots move closer to their transformation and replacement of humans as labor. . . EDITOR

from Future of Tech (MSNBC)

A robot baby being built as part of a neuroscience research program in Japan has just gotten a torso, including arms that flop around like an infant’s sans swaddle.

Affeto, the robo-baby, is creepy in its realism, which is what the team from Osaka University aims to accomplish as they use robotics to study “how humans’ higher cognitive functions develop,” according to a project description. . . . Read Complete Report

“Affetto moves flexibly thanks to 22 pneumatic actuators in its body (3 for neck, 7 for each arm, 1 for chest, and 4 for waist). Visithttp://www.youtube.com/watch?v=nHWimp9uvfo to see how its realistic face moves and also http://www.er.ams.eng.osaka-u.ac.jp/asadalab/project_en.html to know about our project (JSPS grant-in-aid for specially promoted research).”