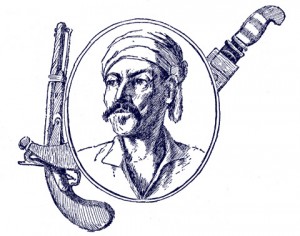 A pirate’s curse is afoot, and it could be keeping some valuable booty several feet underground.

Here in this swampy hamlet on the east bank of the Suwannee River, where the air thickens with mosquitoes, a legend of buried treasure is firmly entrenched in local lore.

For years, through many landowners, treasure hunters have tried and failed to come up with the loot they believe was buried by 1800s French privateer Jean Lafitte — some say because such endeavors carry a curse preventing the treasure from being uncovered.

None have dug up the treasure, with the exception of one rumored recovery that may or may not have happened. . . . Read Complete Report

“The famous pirate Jean Laffitte made his home in Galveston, Texas after being run out of New Orleans by the U.S. Navy. He called his island home “Campeche” and he led a group of “privateers” on countless shipping raids around the Gulf of Mexico for 5 years. When he left Galveston, it is believed by many that he left stockpile of hidden treasure behind and intended to return to reclaim his pirate treasure – the treasure was never recovered and his fate remains somewhat of a mystery. Shot by M. Daleo for “Postcards from Texas” 2010 contact: mdaleo@wildcatterproductions.com”