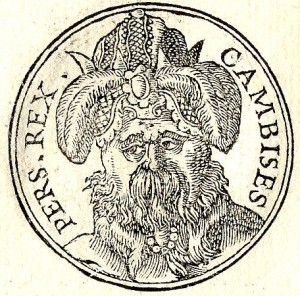 Photo: Cambyses II was the son of Cyrus the Great (r. 559-530 BC), founder of the Persian Empire and its first dynasty. SOURCE “Promptuarii Iconum Insigniorum” Wikimedia Commons (Public Domain)

“Has the lost army of Cambyses II been found? The Persian army of 50,000 soldiers supposedly perished in a sandstorm in ancient Egypt 2500 years ago. Researchers have located a valley of bones they think may belong to the fabled army.’ . . Text posted with video