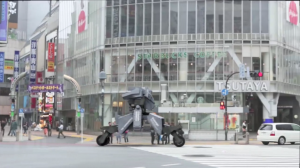 Here’s the new vehicle for those who tend to have road rage. . . . EDITOR

Hold fire on those Christmas lists. Japanese artist Kogoro Kurata has unveiled a 13 ft (4 meter) tall, 9900 lb (4500 kg) prototype mecha robot called Kuratas, which comes complete with “weapon systems” and is apparently [capable] of being driven by an onboard human pilot.

Kuratas is controlled via a software system called V-Sido, which, in addition to the cockpit dash, allows control of the robot by smartphone (over a 3G network), or a master-slave system that sees Kuratas mimic the moves of a much smaller model, which can be manipulated into shapes by the user from a remote position. From the cockpit, a steering column is used to steer the robot, which also includes arms of its own which for manipulating the robot’s upper limbs. Kinect controls are also an option. . . . Read Complete Report w/ photos