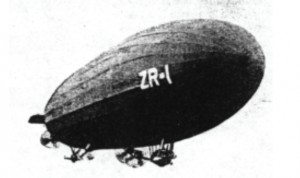 Fans of folklore and mythology are probably well-familiar with the Norse legends of gods, giants and heroes: the Norse myths, viking or Norse sagas, and related materials.  Richard Wagner created an entire feverish mystique about a forgotten “nordic” age with his adaptation of the story of the Rhinegold, Sigurd, and Siegfried, with his “Ring Cycle” series of operas, and its Germanic version of Norse gods and devils, giants and dwarfs, of worlds spread up and down the viking-age Tree of the Universe, Yggdrasil.  This in turn was a huge inspiration for German nationalism and led directly to the eventual creation of a wide range of esoteric German cults like the Thule society, which were based on “hidden knowledge” and ideas of “Aryan” or nordic superiority.  This, of course led directly to bringing the Nazi party to power in Germany.  Hitler was a huge fanboy of Wagner and his myth-derived works.

In my book Caverns, Cauldrons and Concealed Creatures (3rd Expanded Edition), I describe the Norse cosmology in great detail.  To be concise here, the World-Tree extended into several subterranean regions, which corresponded to realms within our planet; but it also extended into the “higher” world of the Gods, called Asgard.  Asgard was generally believed to have been in the ultimate North (at the “top” of the planet or “World Tree”), separated from everything else by a vast gulf called Ginnungagap (“Seemingly Empty” in Old Norse). Even though Asgard was regarded to be a “higher realm”, it still was located on one of the roots of the tree, as were Nifleheim (the land of the dead and of demonic beings), the land of the Light Elves (Alfheim), the land of the Dark Elves (Svartalfheim), and the land of the Jotuns or Frost Giants (Jotunheim).  Far-removed via the vast hollow of Ginnungagap was found Muspelheim, the land of the Fire Giants, the most feared of all the inhabitants of this vast Norse underworld.  And of course, Midgard, or “Middle Earth”, was located on the surface of our world, and was the habitation of human beings.

For the sake of this brief treatise, it is Asgard that we are going to examine most closely.  Many of the other regions were attainable via “short cuts” that avoided Ginnungagap, by taking secret and dangerous passages through subterranean and suboceanic routes to each of the other worlds.  The exception to this alternative accessibility was Asgard, the land of the Gods, where Odin held sway, along with his sons Thor and Frey and their consorts, and a wide range of other gods and beings.  Even the gods themselves had only one route to travel by which they might reach Midgard or any of the other worlds-within-the-world, and that route was to cross over a mystical bridge called Bifröst, the “Rainbow Bridge”.

Located both in the far north and “across” Ginnungagap, and thus impregnable to invasion by Ice and Fire Giants, Asgard enjoyed a true separation from the other realms.  The only method of ingress was over Bifröst,  which means the “quivering roadway”.

All an interesting and fanciful tale, some might say.  How charming, how droll… Those primitive viking barbarians…What could they really know, after all?  Well, to begin with, they weren’t “primitive” or ignorant, not by a long shot.  For almost a thousand years, they were the greatest sailors and shipbuilders the world had ever seen.  They built mathematically-precise hulls of a wide range of vessels, ships which could go where NO other ships had ever been, or could go.  These ships were largely constructed from tightly linked wood beams which would flex with the seas, yet not break; their engineering skills were unparalleled in this area, for an age.  They were the first to use floating lodestone needles, the precursors to compasses, for navigation; they knew the stars and the actions of both water and wildlife so intrinsically that they could calculate distances between land masses, or where land masses should be.  And the oceans weren’t the extent of their explorations; using the vast and then-wild river systems of Eurasia, they ventured deep into Europe and Asia, where one Swedish tribe, the Rus, left their name on a people and a nation when they carved out an empire for themselves there.  They ventured to the British Isles on several occasions, setting up the Danelaw in England, invading Ireland and Scotland, and even reaching the shores of North America well before Columbus did so.  They were masters of medicine and metallurgy, creating intricate works of art of astonishing complexity in gold and silver; and they were among the first peoples to discover “pattern welding” or “pattern forging” of iron swords, knives and other weapons and implements.   The idea of uncouth savages with lice in their beards is a modern absurdity, for they were a clean and healthy people who bathed regularly, built the first saunas, prided themselves on clean clothes and linens, and composed complex and epic poems and epics.  These latter works were all memorized by professional poets and reciters called skalds, who would memorize the words, stanzas, inflections, and proper recitations of multiple book-length works, to be passed on to yet another generation of men of prodigious memory and skill.  In fact, our modern term “scald” or “scalded” has at least part of its etymology or origin in the Norse “skald”, for the spontaneous ridicule of these brilliant men could burn like fire, and would even result in suicides as a result of shame.  For this reason, no skald was ever sent away hungry and without shelter into the cold subarctic night, even when visiting the territory of a rival clan or group.

The viking peoples were a well-educated bunch within their own frame of reference.  They all believed that their worldview was a true and valid one, just as most of us do today.  Rather than scoff, we should perhaps consider: What did they know and what were they telling us?  Their method of imparting information, their symbolic language, was probably very different from ours, but that doesn’t mean that they didn’t know what they were talking about.  On the contrary, upon closer inspection just the opposite seems to be the case.

When we examine the far northern reaches of our planet, many things become evident.  The polar regions are quite unlike any others, and even the Arctic and Antarctic are starkly different in many regards.  The northern roof of the world was the realm of Odin and Thor; it was the place where, somewhere, Bifröst could sometime be seen, and perhaps crossed, if one could but get permission from Heimdall the Watchman.   But that elusive Rainbow Bridge was hard to find… Or was it?

Everyone has heard of the Aurora Borealis, or the Northern Lights, a most colorful phenomenon.  Did the vikings draw their inspiration for Bifröst from this amazing display in the atmosphere?  Probably not, since the Norse term for the aurora was   norðrljós, which simply means “Northern Lights”.

So if the aurora wasn’t the full or even the main inspiration for the Bifröst Bridge, what was? Well, polar exploration over the last two centuries may have uncovered the answer to this puzzle. Norway’s Fridtjof Nansen and numerous other polar explorers were often astonished to find vast expanses of polar ice covered in brilliant-colored stripes of different hues, stretching for miles–even beyond the horizon and out of sight.  Upon inspection, this proved to be bands of pollen frozen on the top of the ice-pack. The sheer amount of this pollen has always had researchers scratching their heads in wonder: WHERE does it all come from, and could it be used to follow wind currents back to a point of origin?  Of course, when the top layers of the icepack melt, it quickly runs off and vanishes.

This multi-colored mystery and the association with a hidden “nordic” land beyond the pole, or in its vicinity, was not lost on the U.S. government from an early time in the nation’s history. The Smithsonian Institution, although they won’t talk about it now, was founded mainly to house “anticipated” discoveries from the hollow earth model proposed by John Cleves Symmes, who was also a delegate to the Continental Congress from New Jersey.  He was a fundamental force behind the exploration of the Northwest Territories. This idea of “evidence of a hidden land beyond the pole” haunted the American imagination and government circles on and off for over a century, culminating in a proposed (and according to some, undertaken) expedition by the U.S. Navy to a mysterious “island” in the northern regions by way a dirigible called the ZR-1, in 1924.  This endeavor was hyped extensively in the press, and was even featured in an article in Popular Science (Dec. 1923), written by Lieutenant-Commander Fitzhugh Green, U.S.N.  This article proposed a serious belief in the existence of an anomalous land near or at the pole, which for some reason was believed to have been inhabited by a Norse-speaking, Norse-descended people.

Original diagram of hypothesized landmass near the pole, from Popular Science.

Could it be that “Asgard” was actually an isolated tropical paradise in the far north, created by volcanic conditions?  Apparently the U.S. Navy thought so at one time.  Could “Bifröst”  be the mercurial, temporary, and often vanishing polar path, marked by pollens carried by winds from this hidden land, and leaving a trail to be followed to a mysterious source?  Perhaps we’ll never know.  At the same time, lest this be thought a fabricated fairy-tale of conspiratorial type, it would perhaps be best if Lieutenant-Commander Fitzhugh Green were to tell it in his own words.  Below is a link to  a PDF (originally compiled by Jan Lamprecht) of the Popular Science article describing the U.S. Navy-planned exploratory trip to the polar regions. If you go to this directory, you will find a PDF file with all of the article content, that you can download freely:

There are a couple of formatting errors in the file, but hopefully you will find it of some use.  It is very interesting.  After a great deal of hype and build-up about this “exploratory journey”, the Navy never released anything else about it.  Decades later they claimed that they didn’t go because of mechanical difficulties.  We all know, of course, that the military-industrial complex and the government never, ever control information or lie about what they’re doing or what they find.

It also appears that  this article and the journey it describes may have been the inspiration for the book The Lost Ones by Ian Cameron, which in turn was the basis for the Disney film “Island at the Top of the World”, which was about a lost race of Norsemen living in a volcanic paradise hidden by thick mists, on an unknown island near the North Pole–and reached by means of a dirigible!

The hidden “Norse City” at the top of the world, from the Disney film. 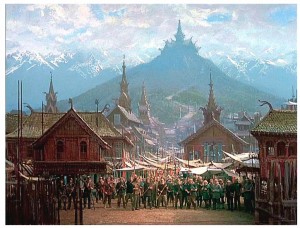 The Disney version of the dirigible that visited the “Island at the Top of the World.”