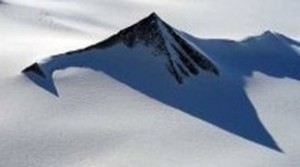 I want to know more before commenting on this. . . . EDITOR

NEW! Pyramid Rising: Reviving the Past – Surviving the Future
Contributed by Zach Royer(AA) There’s talk all over the internet about pyramids in Antarctica, something we at Apparently Apparel love towrite about. What appears to be causing all the discussion is this picture, showing what looks like two, possibly three pyramids lined up Giza style, nearly covered in snow and ice.Frankly, I think we’re looking at plain ordinary mountains here, albeit ones of unusual apparent symmetry. But suppose we ARE looking at pyramids (and I think the size of these mountains would preclude that, but that’s just me), or, to put it differently, supposed there WERE pyramids in Antarctica? What would it mean? . . . Read Complete Report

Civilization Found Melting Out of Ice in Antarctica?

Published on Aug 12, 2012 by apparentlyapparel

Video about how Antarctica was up way more north. Look at the maps.