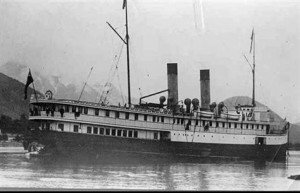 Photo: In this undated file photo is the ship S.S. Islander, which went down in 1901. Mystery has long surrounded the demise of the posh ship, once thought unsinkable. CREDIT: Unknown SOURCE

JUNEAU, Alaska — The state has issued a permit allowing for archaeological work at the site of a sunken Gold Rush-era ship in southeast Alaska.

A permit application was filed earlier this month by David Miller, an archaeologist under contract with Kent, Wash.-based Ocean Mar Inc. The Associated Press obtained documents related to the project, including a copy of the application and work proposal, through a public records request.

Ocean Mar fought for years for salvage rights to the luxury vessel, which was carrying about 180 people from Skagway, Alaska, to Vancouver, British Columbia, when it sank in Stephens Passage on Aug. 15, 1901. Forty people died, according to a court of inquiry report for the Canadian government. In April, a federal judge approved a recovery plan by Ocean Mar. Details remain under seal. . . . Read Complete Report