And then there’s that: Drought makes green marijuana crops more visible for police 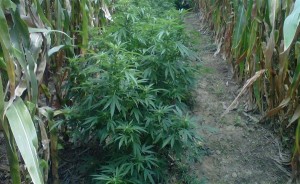 Police in Indiana say they’re finding an unexpected benefit to the drought baking the American Midwest: Marijuana crops are easier to find.

Many of the cornfields across the state’s parched lands are dry and brown, making the distinctive green marijuana crops stand out “like a sore thumb,” according to State Police Sgt. Jerry Goodin.

The State Police on Tuesday cut down 30 newly flowering marijuana plants, The Courier-Journal in Kentucky reported. If allowed to fully mature, these plants would be worth over $30,000, according to The Courier-Journal. Possessing or growing marijuana in Indiana is illegal, Goodin said, and so far in 2012, nearly 30,000 plants have been cut across the state. . . . Read Complete Report