Freedom Group is the most powerful and mysterious force in the U.S. commercial gun industry

With commentary by Rick Osmon

Is it a conspiracy, a cabal, or a corporation?

Scarborough, Maine — Lined up in a gun rack beneath mounted deer heads is a Bushmaster Carbon 15, a matte-black semiautomatic rifle that looks as if it belongs to a SWAT team. On another rack rests a Teflon-coated Prairie Panther from DPMS Firearms, a supplier to the U.S. Border Patrol and security agencies in Iraq. On a third is a Remington 750 Woodsmaster, a popular hunting rifle.

The variety of rifles and shotguns on sale here at Cabela’s, the national sporting goods chain, is a testament to America’s enduring gun culture. But, to a surprising degree, it is also a testament to something else: Wall Street deal-making.

In recent years, many top-selling brands – including the 195-year-old Remington Arms, as well as Bushmaster Firearms and DPMS, leading makers of military-style semiautomatics – have quietly passed into the hands of a single private company. It is called the Freedom Group – and it is the most powerful and mysterious force in the U.S. commercial gun industry today.

Never heard of it? You’re not alone.

Read more of this original NYTimes story HERE
————————
Now for my take…
.
No, it’s not a cabal or conspiracy dedicated to preventing private gun ownership. In fact, it is a corporation dedicated to profit. Huge profit. In all, the parent company, Cerberus Capitol Management is a $40 Billion per year investment fund. Near the head office, but not at the top is former US Vice President, 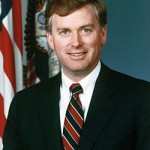 Dan Quayle, with a couple retired generals still calling him “sir” while maintaining some contact with Army Material Command.
.
Although it was Dan’s then executive superior who became infamous for uttering the phrase “New World Order” (when he meant constitutional government, but speech writer, George Saffire wanted a snappy catch phrase ), Cerberus doesn’t show any signs of plans for world domination. Not yet, anyway. Stephen Feinberg, the chief executive of Cerberus is a graduate of Princeton and therefore not eligible to belong to Skull and Bones.
.
However, the company did get a big chunk of the “bailout bucks” for their other little company, Chrysler Corporation, so they are apparently not averse to playing the game with the “big boys”. on Wall Street or dipstick politicians.

The subsidiary Freedom Group, the gun manufacturing branch of the family, has only comparatively minor military contracts ($28M or so). By far, the bulk of their sales are consumer-oriented guns that just happen to look a lot like fielded “infantry weapons, individual served” (one each).
.
The product quality is high, the demand is high, and the profit margins are good enough to keep the investors very happy.
.
And I’m betting none of them go bird hunting with Dick Cheney.
——————–
——————–