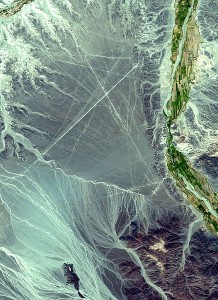 The Nazca Indians lived in Peru during the first millennium of theChristian Era. The Nazca had a reasonable sophisticated society, with fairly advanced craft skills. They were subsumed after a series of conquests by neighboring tribes, all of whom are now virtually extinct.

The Nazca left no great literature. They built no fabulous palaces. They were not hiding weapons of mass destruction. They didn’t memorably slaughter any other culture. In short, there is only one reason that the Nazca have been elevated above the level of historical footnote — the Nazca Lines, gigantic illustrations etched into the ground which can only be viewed from high in the air. . . . Read Complete Report

From UFOTV®, accept no imitations. Researcher David Hatcher Childress and his investigative team head down the Pan American Highway from Lima to Ica and Nazca. In Ica they investigate the huge elongated alien looking skulls discovered in the area, and then they investigate the strange museum of Dr. Cabrera and its stones depicting dinosaurs and humans. Then the team flies over the Nazca figures in order to grasp their amazing complexity. Were they meant to be seen only from the air by the sky people? The team then journeys to Cuzco in central Peru and visit the megalithic sites of Ollantaytambo, Machu Picchu and Sacsayhuaman, including a special examination of megalithic rock quarry near the Inca Trail. Extra features. . . . Text posted with video at youtube