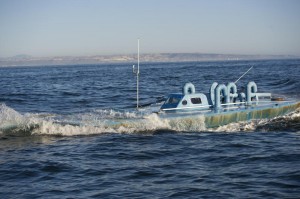 ScienceDaily (Sep. 7, 2012) — The erstwhile planet Pluto (now officially a dwarf planet.) was known for decades as a small, dark planet — hidden, difficult to spot, and on a quiet, determined course all its own. And so, when the DHS Science and Technology Directorate (S&T) needed a target semi-submersible to detect the hidden but determined maritime smuggling operations of the South American drug cartels, it created its own vessel and called it “PLUTO,” after the planet that is so difficult to spot. S&T’s PLUTO is a small, semi-submersible that is representative of what are popularly called “narco subs,” and serves as a realistic practice target for the detection systems of DHS and its national security community partners. . . . Read Complete Report

video of narco submarine being chased Aug 2011. Navy vessels intercept various narco subs on the surface but other subs are scuttled before capture