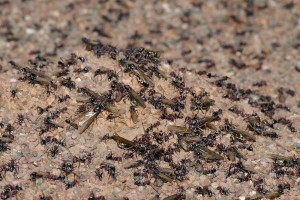 Ants that are held as slaves in nests of other ant species damage their oppressors through acts of sabotage. Ant researcher Professor Dr. Susanne Foitzik of Johannes Gutenberg University Mainz (JGU) first observed this “slave rebellion” phenomenon in 2009. According to the latest findings, however, this behavior now appears to be a widespread characteristic that is not limited to isolated occurrences. . . . Read Complete Report

Watch an amazing video in which scientist uncover a giant ant colony that covers 50 square metres and goes eight metres down into the earth. The ants removed 40 tonnes of material to build this enormous colony.

Category: It's a Strange World After All / Tags: ants, Rebellion, Slave, widespread