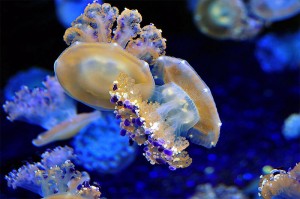 NEW ORLEANS — An eel undulating through coastal waters, powered by batteries and checking for mines. A jellyfish is actually a surveillance robot, powered by the atoms around it. Fins pick up intelligence while propelling a robot bluegill sunfish.

The Office of Naval Research is supporting baby steps toward making those visions of the future a reality. For instance, the jellyfish work in Texas and Virginia is focused on how the creatures move in water, and how to mimic or even surpass their abilities. The robojellyfish is currently tethered to hydrogen and oxygen tanks, and ONR project manager Robert Brizzolara said he doesn’t plan to try making it move autonomously yet. . . . Read Complete Report