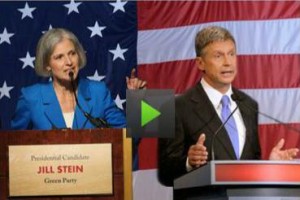 UPDATE: Due to Hurricane Sandy the Third Party Presidential Debate between Libertarian candidate Governor Gary Johnson and Green Party candidate Jill Stein has been rescheduled for Novemver 5, 2012.  We will carry it live here on THEI. . . . EDITOR

Libertarian Party candidate Gov. Gary Johnson and the Green Party’s Jill Stein will sound off once more before Election Day, with both presidential hopefuls now slated to debate live from RT’s Washington, DC studio on November 5.

Tens of thousands around the globe watched earlier this week when broadcasting legend Larry King moderated a debate between the top third-party candidates live from Chicago. As those politicians continue to be shunned by the mainstream media and political establishment alike, though, they remain excluded from presenting their platform to the country on the eve of a historic election. RT aims to make a difference, however, and will host Johnson and Stein to speak their minds on the topics Americans really care about in 2012. . . Read Complete Report

Did you miss the first debate? Go a little DEEPER:

Tuesday October 30 2012 we will carry the second 3rd Party Presidential Debate just as we carried the first.

The two top winners of the last debate; the Green Party’s Jill Stein and Libertarian Gary Johnson, will have another chance to explain their views on foreign policy, the Economy, War on Drugs, campaign Finance, the Drone Program etc. Real foreign policy problems. See ya there!. . . EDITOR

The two-party system has dominated the airwaves for decades. The last time a third-party candidate shared the stage with a Democrat and Republican was when Ross Perot was campaigning for the White House. Recently on CNN, Gary Johnson was given some air time but was grill for his stance on certain issues. In an attempt to give third-party candidates a voice and to level the playing field, RT will be hosting a foreign policy debate for the other guys. Liz Wahl joins us with more. . . . Text posted with video at youtube