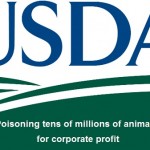 It’s absolutely shocking news: The U.S. Department of Agriculture has publicly admitted it is responsible for the mass poisoning of tens of millions of birds over the last several years. It’s all part of the USDA’s program called “Bye Bye Blackbird,” and we even have the USDA’s spreadsheet where they document how many millions of birds (and other animals) they’ve poisoned to death.

Here I document the number of animals the USDA is actually killing, based on their own reports:www.naturalnews.com/031084_bird_deaths_holocaust.html

There’s even a video that explains the USDA’s involvement in a recent mass bird die-off near the border of Nebraska: naturalnews.tv/v.asp?v=191572F79E8B2C64705B4AB182AF54F9

Not all the mysterious bird die-offs that have been witnessed around the globe recently are due to unexplained causes. A recent mass die-off event witnessed in Yankton, South Dakota was traced back to the USDA which admitted to carrying out a mass poisoning of the birds. . . . Read Complete report