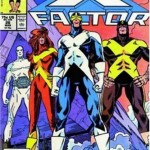 When I ran across this post I knew I had to post it, if for nothing else but to keep Rick and Jackal off my back if they missed the story. Besides its a cool story! . . . EDITOR

(the comic book cover art and thousands more can be viewed at http://www.coverbrowser.com/)

Mark this up as one more blow to human-mutant equality. Marvel lawyers are putting up a fight to prove the mutants aren’t the same as humans after all. Unleash the Sentinels!

This strange piece of news comes via the Radiolab Podcast, which uncovered a weird saga of legal wrangling and tariff shenanigans.

Toys manufactured in various countries and later imported to the US have to be taxed. And the taxes for each kind of toy vary, depending on the description. Specifically, “dolls” are toys that represent some sort of human, and “toys” are representations that are non-human, such as robots or animals. And it turns out, the non-human toys are taxed at a much lower rate than the human ones, 6.8 percent versus 12 percent. Hence, two Marvel lawyers are arguing that Mutant action figures are not actually human — and therefor shouldn’t be taxed as much. And thus unknowingly unleashing the age-old Mutant debate that has long been a part of the X-Men’s world. . . . continue