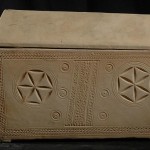 from Alien and UFO Community

Using a robotic arm equipped with a camera, archaeologists have found human bone boxes and an inscription that reads ‘Divine Jehovah, raise up, raise up’ in a 1st Century Christian burial chamber beneath a tower block in Jerusalem.

They believe that this is proof the site is the final resting place of Jesus. However, other scholars remain highly sceptical of the find.

The inscription is on a limestone box known as an ossuarie – with another such box carrying a drawing of a fish with a stick figure in its mouth which is believed to refer to the story of Jonah and the Whale – one of the very first biblical stories.

Archaeologists then claimed it contained ossuaries inscribed with names associated with Jesus’s family.

That discovery sprouted amazing theories including one that maintained Jesus had been buried there alongside Mary Magdalene who he had married and raised a family with.

However many leading theologians and archaeologists rubbished such claims as being completely unfounded.

The Jesus Family Tomb was only examined briefly before protests by Orthodox Jews, concerned about the disturbance of a grave site, ended the excavation.

It was then sealed up, and a tower block built over it.

However James Tabor, a scriptural scholar at the University of North Carolina at Charlotte and documentary filmmaker Simcha Jacobovici were determined to continue the research.

The pair obtained permission from the Israeli government in 2010 to use the robotic arm to drill holes allowing them to explore the surrounding area.

This led to the discovery of a separate chamber which they named the ‘Patio Tomb’, as it sits almost directly below the patio of the building.

It was inside the Patio Tomb that they found the inscriptions.

The pair claim the inscriptions discovered inside the patio tomb greatly increase the likelihood that the ‘Jesus Family Tomb’ is indeed, the resting place of Jesus. . . . Read Complete report w/ photos