Tag Archive for Hollow Earth in the Puranas 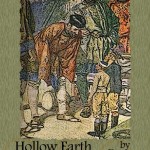