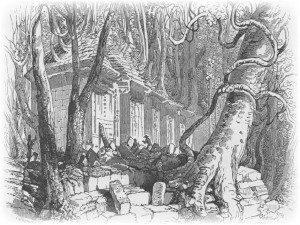 (Atlanta) Six hours southeast of Atlanta off the Georgia coast on Sapelo Island, archaeologists have unearthed the remains of an ancient walled city which predates the construction of many of Egypt’s pyramids. Known as the Sapelo Shell Ring Complex, this ancient city was constructed around 2300 B.C. and featured three neighborhoods each surrounded by circular walls twenty feet in height constructed from tons of seashells. Some of the earliest pottery in North America was also found buried in the remains of this lost city.

The site is quite an enigma because at the time of its construction the Native Americans living in the area were simple hunters and gatherers who had yet to invent agriculture. Many scholars believe agriculture is a prerequisite for civilization. Did these simple tribal people somehow make the leap from hunting-and-gathering to civilization in a single bound producing not only a walled city but also the new technology of pottery without the benefit of agriculture? Or did an already civilized people arrive on the coast of Georgia from elsewhere and, if so, where did they come from and why? . . . Read complete report w/photos