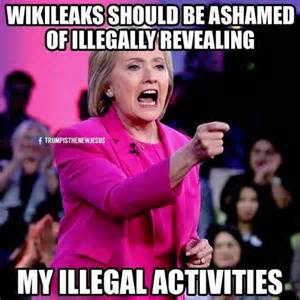 Wikileaks Finally Did It …… She’s Done!

From The Western Media

Wikileaks Finally Did It …… She’s Done!

If there was ever a smoking gun to be produced by WikiLeaks, this is it!

Specifically, James Comey originally used the argument that the evidence found against Hillary was lacking an “intent” element, meaning they didn’t find she intended to break the law. Well, WikiLeaks just produced all the “intent” we need.

HERE’S HOW IT BREAKS DOWN…

Zero Hedge has put the pieces together by pointing out the following:

On March 2, 2015 The New York Times reported that Hillary Clinton used a personal email server as Secretary of State.

Later on March 2, 2015 Hillary Clinton’s top aide and attorney wrote John Podesta that “we are going to have to dump all those emails.”

You can clearly see the email from John Podesta below to Cheryl Mills saying,“On another matter….and not to sound like Lanny, but we are going to have to dump all those emails so better to do so sooner than later”

So there you have it folks! Comey’s ‘intent’ element has just been produced and things are going to only get worse, because it’s expected that Hillary’s 33,000 deleted emails will be released this week as well.

Zero hedge also points out that, “a search for Lanny Davis reveals the following curious exchange between Robby Mook and John Podesta from March 8, 2015, just days after the abovementioned exchange, in which Mook says:”

“We gotta zap Lanny out of our universe. Can’t believe he committed her to a private review of her hard drive on TV.”

Clearly, the Clinton camp has been hiding and destroying evidence the entire time and they have just incriminated themselves for all of America to see.

This article originally appeared on thewesternmedia.net

END_OF_DOCUMENT_TOKEN_TO_BE_REPLACED

“I love Wikileaks,” candidate Donald Trump said on October 10th on the campaign trail. He praised the organization for reporting on the darker side of the Hillary Clinton campaign. It was information likely leaked by a whistleblower from within the Clinton campaign to Wikileaks.

[Shadow Govt Sidebar] Next WikiLeaks worry: the release of the code

“SAN FRANCISCO — The computer security world is bracing for the next bombshell from the massive Wikileaks document leak: disclosure of the actual computer code for the CIA’s alleged cyberweapons. . . .”

“. . . The prospect of what hackers could do with the code is “so mind-boggling that it’s difficult to categorize all the consequences,” says Robert Cattanach, a partner at international law firm Dorsey & Whitney and previously a trial attorney for the Justice Department. “As individuals, we would no longer have any reasonable expectation of privacy,” he said. . . .”   Read Complete Report

Published on Dec 20, 2013
What would a former Gitmo detainee, a journalist in a small central Asian newspaper and an editor of a big Western publication have in common? They are provided with documents from WikiLeaks about politics in the region, but what will they do with them? ALL PARTS OF THE MOVIE: http://on.rt.com/rv5ose

On Friday, Bradley Manning’s defense team concluded their closing arguments by saying that the soldier is not a traitor. For nearly two months, Army Judge Col. Denise Lind heard both sides of the case for Manning’s involvement in disclosing hundreds-of-thousands of cable to the website WikiLeaks. RT’s Liz Wahl is at Fort Meade in Maryland with more.
Find RT America in your area: http://rt.com/where-to-watch/
Or watch us online: http://rt.com/on-air/rt-america-air/