FAA to Bid Out 1 of 6 Drone Testing Sites in US (+) US as Murder, Inc: No Over-site for Drone killings (Video Report) 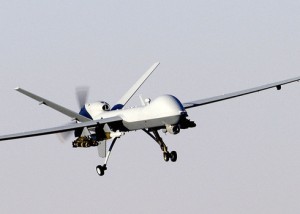 The entire drone industry is growing worldwide and domestically as the police state surveillance grid thickens. Now, worse then cameras on every street corner, citizens have other eyes to fear, the ones in the sky.

Tethered high altitude blimps, research platforms, and straight out drones (both military and private) in the skies over the US have changed our nation forever, as this newly proposed test site will be the earmark for getting this $10-100 million a year industry into full swing. . . . Read Complete Report

US as Murder, Inc: No oversight for drone killings

Vicki Divoll, a former general counsel to the Senate Select Committee on Intelligence and former deputy legal adviser to the C.I.A.’s Counterterrorism Center, and Vincent Warren, Executive Director of the Center for Constitutional Rights, talk to Bill Moyers about legal, ethical, and judicial issues involved in U.S. unmanned drone attacks and whom they target. Warren and Divoll express their concern over U.S. citizens placed on the “hit list,” as well as an alarming lack of policy disclosure by the government. . . . Read Complete Post