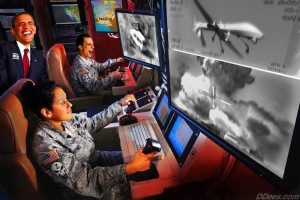 Enraged veterans say President Obama “is treading into sacred ground” by allowing the Pentagon to establish a new medal intended to recognize the achievements of drone pilots and “computer geeks,” most of whom never leave the comfort of an air-conditioned building in Tampa or Las Vegas.

Vietnam-era pilot and veteran Terry Reed told WND, “Giving ‘gamers’ a medal, instead of people who actually suffered in real combat, will definitely be demoralizing.

“This is a slap in the face of all combat veterans who serve in harm’s way,” he added.  “I know for a fact that military pilots are not happy about this new medal.” . . . Read Complete Report

They may be known as the faceless killers of modern warfare, but it seems the US military wants them firmly in the spotlight. Defense Secretary Leon Panetta has announced the creation of the Distinguished Warfare Medal, which will be handed out to joystick wielding drone pilots, who wage their battles far from the front line. READ MORE: http://on.rt.com/zufga9