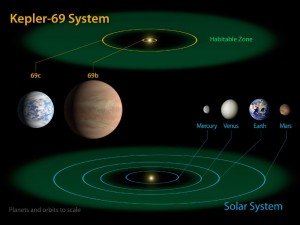 “The diagram compares the planets of the inner solar system to Kepler-69, a two-planet system about 2,700 light-years from Earth in the constellation Cygnus. The two planets of Kepler-69 orbit a star that belongs to the same class as our sun, called G-type”. . . . Source NASA

NASA’s planet-hunting telescope has discovered two planets that seem like ideal places for some sort of life to flourish. They are just the right size and in just the right place near their star. It was a major breakthrough for astronomers when they located not one, but two habitable planets. Ian O’Neill astrophysicist and space producer of the www.discoverynews.com joins us to talk about this discovery.
Find RT America in your area: http://rt.com/where-to-watch/
Or watch us online: http://rt.com/on-air/rt-america-air/