#Unrig Part 3: The Movement – The Summer of Peace – HELP SAVE AMERICA The Peaceful Revolution Has Begun 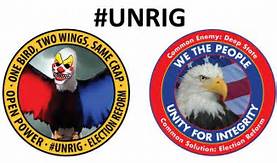 Join the Movement #Unrig. I am. Get Involved. It’s TIME to get SERIOUS!!  HELP SAVE OUR AMERICA . . Your Editor Dennis Crenshaw

MISSION:
To restore integrity and truth to governance, with the informed will of We the People at its heart.

VISION:
To enjoy a transparent government by 2022, that operates with honesty, respecting our planet and the human spirit. That we may create a healthy, prosperous America rooted in truth with peace as our shared condition.

Robert David Steele is an activist for election reform. A former spy and pioneer for Open Source Everything Engineeering, he was recently nominated for the Nobel Peace Prize. He has written the Trump Revolution series at Amazon and free online, and is the co-founder with Cynthia McKinney of #UNRIG: Summer of Peace (Beyond Trump & Sanders).

Dr. Cynthia McKinney, the first black woman elected to represent Georgia in the U.S. House of Representatives, served six terms as a Democrat. She left the Democratic Party to run as the residential candidate of the Green Party in 2008. While in office and since Dr. McKinney has been a fierce advocate of fact-based governance with integrity. She has many published books and articles to her credit. She is a recognized voice across many peace and humanitarian fronts. She is the co-founder, with Robert David
Steele, of #UNRIG: Summer of Peace (Beyond Trump & Sanders).

Denise M. Wilbanks is a contemporary thinker and visionary. She is the author of Connecting to Love: Unleashing the Power of Yes. Denise reaches out to heal others through tools in self-empowerment.

Steve Bhaerman is a transpartisan activist and “uncommontator” who’s spent the past 30 years using comedy to bring people together. He is the author of Spontaneous Evolution with noted cellular biologist Bruce Lipton, and Reuniting America with transpartisan pioneer Joseph McCormick.

Angie Blake is CEO and Editor in Chief for Victurus Libertas. She has been a humanitarian, an activist, a mother, and a truth seeker for the majority of her life. She seeks happiness in a world filled with peace and truth rather than violence and deceit. She seeks to change the world.

Robert Steele breaks down #UNRIG: Summer of Peace and then spills the beans on Alex Jones. With the violent, Soros-funded #RESIST psy-flag about to be unleashed on America next week, why is #UNRIG NOT being covered on Infowars? Alex, break the media silence on #UNRIG ASAP and get Robert back on the show already! 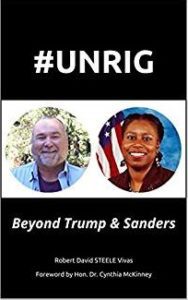 Robert David Steele on data-url=”/results?q=%23UNRIG”>#UNRIG: Beyond Trump and Sanders, the IndieGoGo

A hope that we all wake up and take our destiny into our hands. The possibility for all of us working together for the benefit of all.
https://medium.com/@robert.david.stee…
Check it out and join the work! 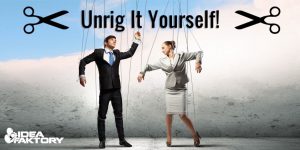